Toyota, having begun development of a hydrogen fuel cell electric vehicle in 1992,

when they introduced the Mirai saloon, have announced their second-generation

Mirai will be available in 2021. Toyota Ireland are looking to bring in a demonstrator

model here in 2021, with limited numbers arriving in 2023, in conjunction with the

No other emissions than pure water

With the launch of this second-generation Mirai, Toyota are confident that this is a car that takes FCEV technology to a higher level and includes a comprehensively redesigned fuel cell system, intelligent packaging and aerodynamic efficiency help extend the driving range to around 650 km, with no other emissions than pure water.

News of the new Mirai comes just two weeks after Hydrogen Mobility Ireland (HMI) announced a multi week, in-service, trial of a fuel cell electric bus in the Dublin area. This will be the first ever Hydrogen Fuel Cell Electric Vehicle (FCEV), powered by a 60Kw Toyota Mirai fuel cell stack. The trial looks to demonstrate the many practical uses and environmental benefits of hydrogen towards a carbon-free society.

Toyota Ireland is looking to bring a Mirai demonstrator model to Ireland in 2021, along with a temporary refuelling station. Working closely with the Hydrogen Mobility Ireland, of which Toyota Ireland director Mark Teevan is Chairman, the ambition is to bring in limited numbers of the Mirai in 2023, when refuelling stations are available in Dublin.

Steve Tormey, Chief Executive of Toyota Ireland commented on the announcement: “The new Mirai represents a major step forward in sustainable motoring, emitting only water from the tail pipe, and going beyond zero emissions by cleaning the air as it moves.

“We are very excited about bringing the new Mirai to Ireland, and are looking to bring in demonstrator models next year. Hydrogen fuel cell can play a pivotal role in moving us towards a carbon-free environment and it is a real game changer for the health and wellbeing of our planet and future generations.”

Cleaning the air as you drive

The environmental benefits of driving the Toyota Mirai go beyond zero emissions to “negative emissions” – as the car effectively ‘cleans the air’ as it moves. A Toyota innovation, a catalyst-type filter is incorporated in the air intake. As air is drawn into the vehicle to supply the fuel cell, an electric charge on the non-woven fabric filter element captures microscopic particles of pollutants, including sulphur dioxide (SO2), nitrous oxides (NOx) and PM 2.5 particulates. The system is effective in removing 90 to 100% of particles between 0 and 2.5 microns in diameter from the air as it passes into the fuel cell system.

Improvements in performance and design

In developing the new Mirai, Toyota has made it a priority to improve its driving range compared to the first-generation model and going beyond the distances typically achieved by battery electric vehicles. Increased power and hydrogen fuel capacity, improved efficiency and better aerodynamics all contribute to extending the driving range by 30% to around 650 km.

The new Mirai is built on Toyota’s modular GA-L platform, which is already in use in the top-of-the range Lexus LS. This provides a more efficient and well-balanced arrangement of the new FCEV powertrain – notably with the fuel cell stack moved from beneath the cabin to the front compartment – has allowed for a more spacious, five-seat interior with improved legroom for rear seat passengers.

Adopting the GA-L platform has resulted in the Marai being a spacious, five-seat cabin and a better chassis balance. It also enables three high-pressure hydrogen tanks to be fitted, increasing fuel capacity and the car’s driving range – by 30%.

The tanks are arranged in a “T” configuration, the longest running longitudinally and centrally beneath the vehicle floor, with two smaller tanks set laterally beneath the rear seats and luggage compartment. Together they can hold 5.6 kg of hydrogen, compared to 4.6 kg in the current Mirai’s two tanks.

The new architecture also permits the all-new hydrogen fuel cell to be moved r to the front compartment (equivalent to the engine bay), while the (more compact) high-voltage battery and electric motor are positioned above the rear axle. This powertrain layout has been optimised to give new Mirai a 50:50 front:rear weight distribution.

The new Mirai is equipped with lithium-ion high-voltage battery in place of the current model’s nickel-metal hydride unit. Although smaller in size, it is more energy-dense, giving higher output and superior environmental performance. Containing 84 cells, it has a 310.8 rated voltage compared to 244.8, and a 6.5 Ah capacity, versus 4.0 Ah. Overall weight has been reduced from 46.9 to 44.6 kg. The output has improved from 25.5 kW x 10 seconds to 31.5 kW x 10 seconds.

The batteries are positioned behind the rear seats, avoiding intrusion in the load compartment. An optimised air-cooling path has been designed, with discreet inlets either side of the rear seats.

Targeting a 10-fold increase in sales

The introduction of the new Mirai will see Toyota target deeper market penetration with a 10-fold expansion in sales volume. This growth will be supported by the new model’s stronger performance and greater customer appeal, notably as a more affordable vehicle with a selling price reduced by around 20%.

The practicality of hydrogen FCEV ownership will also steadily increase as markets improve their hydrogen infrastructure, the number of filling stations rises and Governments and local authorities introduce new incentives and regulations for cleaner mobility. 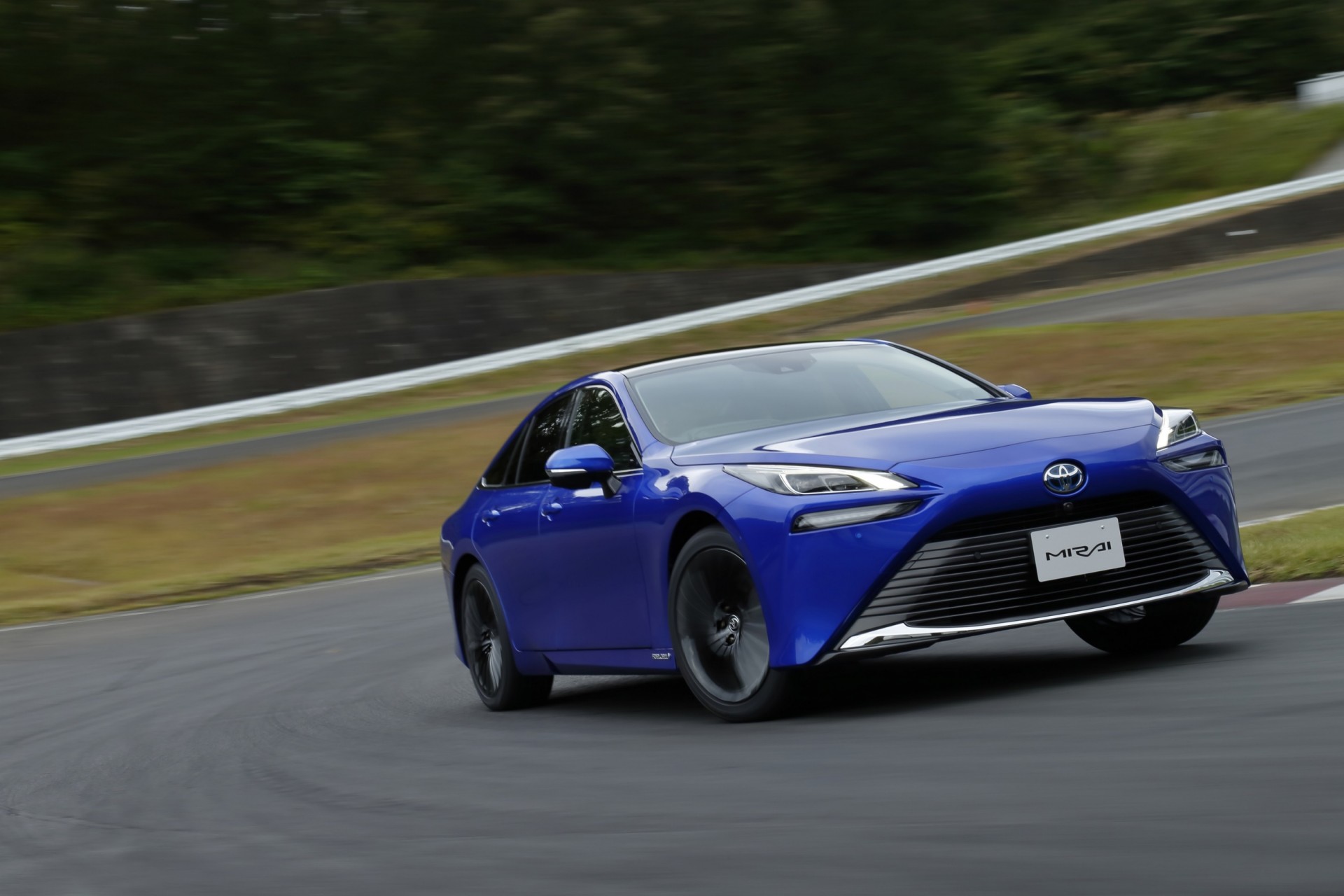