The new Kia Sorento has just been unveiled; the fourth generation of Kia’s midsize SUV will be built for Europe at Kia’s Hwasung manufacturing facility in Korea. It joins the Seltos, Stonic and Sportage in Kia’s SUV offerings.

European sales are due to commence in the third quarter of 2020; the car will be available to order in most of Kia’s global markets by the end of the year. It will be sold in Europe with Kia’s seven-year, 150,000-kilometre warranty as standard.

The 2020 Sorento is their first vehicle to be based on Kia’s new-generation midsize SUV platform. It is paired with a larger body to maximise cargo and luggage space, the platform ensuring the Sorento is a versatile and spacious three-row SUV.

Emilio Herrera, Chief Operating Officer for Kia Motors Europe, commented on the new Sorrento: “The Sorento’s evolution over the last 18 years echoes that of the Kia brand as a whole. While the car was initially launched in 2002 as a utilitarian all-terrain vehicle, the fourth-generation Sorento has been transformed into something altogether more desirable. It is an important model for Kia, particularly now that it also represents the first use of electrified power in our flagship SUV.”

The front of the Sorento wears Kia’s hallmark ‘tiger nose’ grille, displaying a wider shape which wraps around the integrated headlamps on each side. The headlamps themselves feature a new ‘tiger eyeline’ LED daytime running light, with a wide, rectangular lower air intake, bookended by wing-shaped air curtains to channel air around the car. A sharp bumper lip is also capped with a skid plate.

This new model is 1,900mm wide, 10mm wider than the third-generation Sorento.

Wearing its name centrally across its tailgate, there are new vertical tail lamps which wrap around the side, with trim on the lower rear bumper adding to the appearance of dual tailpipes. Akin to the front, a rear skid plate adds to the Sorrento’s SUV aesthetic. A subtle integrated spoiler also conceals the rear wiper.

Ten paint finishes will be available to new Sorento owners in Europe, with the option of 17, 18, 19 and, for the first time in the line-up, 20-inch aluminium alloy wheels.

The interior of the fourth-generation Sorento will come with premium-quality materials and cutting-edge infotainment. The upscale cabin introduces twin digital displays in the dashboard. The 12.3-inch digital driver instrument cluster is twinned with a 10.25-inch touchscreen infotainment and navigation system at the centre of the dashboard.

These are designed so as to display information clearly within the driver’s line of sight, with the car’s many functions controlled with new haptic buttons on either side of the screen. The focal point of the dashboard is the vertical ventilation stack, with a chrome-effect surround that extends onto the centre console below.

The cabin of the new Sorento integrates a range of other technologies, including an available choice of 64 Mood Lighting system. This emits soft ambient downlighting from beneath the dashboard and door trim, creating a lounge-like feeling and greater sense of space. A wireless smartphone charger also sits at the base of the centre console, while a 12-speaker Bose surround-sound system is also available to provide a more immersive in-car audio experience.

Material quality is enhanced, with a cabin that blends metallic trim, leather upholstery, and embossed satin-effect surfaces. In Europe, the Sorento is offered to buyers with a choice of black cloth, leather (grey or black single-tone, or black-and-grey two-tone), or black quilted Nappa leather.

The new Sorento is based on Kia’s new third-generation midsize SUV platform, providing space for people and cargo through more intelligent packaging. This new platform is based around a compact engine bay structure and shorter front and rear overhangs, with a 35mm longer wheelbase creating greater cabin space between the axles. The structure and layout of the new platform allows the Sorento to accommodate electrified powertrains for the first time.

The Sorento Hybrid’s battery pack is located under the floor of the cabin. As a result, the SUV offers space for up to seven passengers as well as up to 821 litres (for seven-seat models) or 910 litres (for five-seat models), depending on specification. This means the car can accommodate five people in comfort, and a significant amount of luggage.

In seven-seat models, with all seven seats in place, boot space is also increased by 32% compared to its predecessor, to 187 litres (VDA, diesel models; 179 litres for Hybrid models). Controls in the side wall of the boot also let users fold down the second-row seat backs remotely at the touch of a button.

For passengers, the new platform has created extra legroom for first- and second-row occupants, as well as more headroom for third-row passengers. Aided by the platform’s longer wheelbase, the second-row seats now slide up to 45mm further, creating a wider point of entry to the third row with more space for feet and legs. There is also a new grab handle built into the interior trim inside the C-pillar, giving third-row passengers something to hold on to as they climb aboard. Once seated, the third-row armrest has also been extended by 100mm, while incorporating a cupholder and smartphone tray.

The Sorento Hybrid is powered by a new ‘Smartstream’ electrified powertrain, pairing a 1.6-litre T-GDi (turbocharged gasoline (Petrol) direct injection) with a 1.49kWh lithium-ion polymer battery pack and 44.2kW electric motor, producing 230ps and 350 Nm torque. The Sorento’s new platform means the battery pack can be located under the floor, with minimal impact on cabin or luggage space.

Power is sent through the six-speed automatic transmission via a transmission-mounted electrical device, allowing the full power of the engine and motor to be transferred in parallel with minimal loss of energy.

A new four-cylinder 2.2-litre ‘Smartstream’ diesel engine is also on the Sorento’s European menu, producing 202ps and 440Nm torque. With a new aluminium block, 19.5kg lighter than the cast iron block of its predecessor, the new engine is 38.2kg lighter compared to that found in the third-generation Sorento. It is paired with Kia’s new eight-speed wet double-clutch transmission (8DCT).

Fuel efficiency and emissions data for the Sorento’s new powertrains will be announced closer to the car’s European on-sale date later in 2020.

The first-generation Sorento (2002-2009) was based on a ladder-frame chassis, with the second-generation model (2009-2015), the first monocoque-based Sorento. This new platform promises a similar leap forward, engineered to maximise driving stability in all environments.

The car now aided by heavily revised fully-independent suspension, with lower noise and vibrations through the suspension, improved body control and steering responses under cornering. The 35mm longer wheelbase should contribute to an overall improvement in cruising comfort, while the new bodyshell, with a 4% average increase to tensile strength throughout its structure, should also result in lower body vibrations.

New for the fourth generation Sorento model is enhanced all-terrain capability over its forebears thanks to a new Terrain Mode. Paired with the optional all-wheel drive system, Terrain Mode makes the Sorento more capable in mud, snow and sand.

With each mode selectable from a dial on the centre console, Terrain Mode carefully controls the car’s standard electronic stability control (ESC), as well as the distribution of torque to all four wheels. It also adapts transmission shift times to help the car find and maintain traction in a range of driving environments.

The Sorento has a suite of technologies that enhance safety, connectivity and infotainment. Depending on specification, the cabin incorporates Kia’s latest 10.25-inch touchscreen infotainment system, offering audio-visual navigation, and a new 12.3-inch high-resolution digital instrument cluster. An 8.0-inch display audio system is also available as standard, while all infotainment systems enable full, smartphone integration with Apple CarPlay and Android Auto.

The new Sorento also offers Kia’s UVO Connect telematics system, connecting drivers by providing invaluable information via the in-car touchscreen and on their smartphone. Featuring Kia Live services and accessible through the optional 10.25-inch LCD widescreen, the system displays live traffic information, weather forecasts, points of interest, and details of potential on- and off-street parking (including price, location and parking availability). UVO Connect also enables drivers to send route directions to their car before a journey, and check the location of their vehicle at any time.

The infotainment system also allows Bluetooth smartphone pairing for two phones concurrently, enabling separate phones to be used for, for instance, phone calls and music, while front passengers can also plug in their mobile devices via two USB chargers.

For second-row passengers, two USB charging sockets are integrated into the backs of the two front seats, with a third found at the rear of the front-row centre console. Both third-row passengers also have their own charging points, meaning all seven passengers can keep their mobile device charged.

The Sorento is also available with a head-up display, which projects driving information onto the base of the windscreen in the driver’s line of sight. The system displays alerts from the car’s numerous driver assistance technologies, details of vehicle speed, and turn-by-turn navigation instructions.

Kia’s Advanced Driver Assistance Systems (ADAS) helps to reduce many of the inherent hazards and stresses of driving, protecting occupants and other road users on every journey.

Depending on specification, the ADAS range in the 2020 Sorento includes Kia’s latest Forward Collision-Avoidance Assist (FCA) technology with pedestrian, cyclist and vehicle detection. This also detects oncoming traffic when making a turn at a junction.

The Sorento is also available with:

Kia’s ‘level two’ autonomous driving technology, Lane Following Assist (LFA), controls acceleration, braking and steering depending on the vehicles in front. LFA operates between speeds of 0 and 180kph, using camera and radar sensors to maintain a safe distance from the car in front, while monitoring road markings to keep the Sorento in the centre of its lane.

Remote Smart Parking Assist (RSPA) enables drivers to move their car autonomously out of a front-and-back parking space remotely with their key fob. This is designed to make it easier for passengers to get in and out of the car in tight parking spaces, or if another driver parks too close to access any of the doors.

RSPA brakes the Sorento automatically if it detects another car, cyclist or pedestrian behind the vehicle or crossing behind it. The Sorento’s Safe Exit Assist feature also prevents rear doors from opening if the vehicle detects a hazard approaching from behind, such as a cyclist or another vehicle.

The Sorento is fitted with up to seven airbags (dual front airbags, dual front seat-mounted side airbags, side curtain airbags with rollover sensor, and front centre airbag). The front centre airbag, a new innovation, provides additional head protection for front-seat occupants and is designed to prevent their heads coming into contact during a collision. All Sorento models are equipped as standard with Kia’s Vehicle Stability Management (VSM) and Electronic Stability Control systems to help drivers maintain control under braking and cornering.

The new Sorento also implements Kia’s first Multi-Collision Brake system, which enables the Sorento to mitigate the severity of secondary collisions. It automatically applies vehicle brakes when the airbags have been deployed after an initial collision, further protecting occupants from secondary frontal or side impacts. 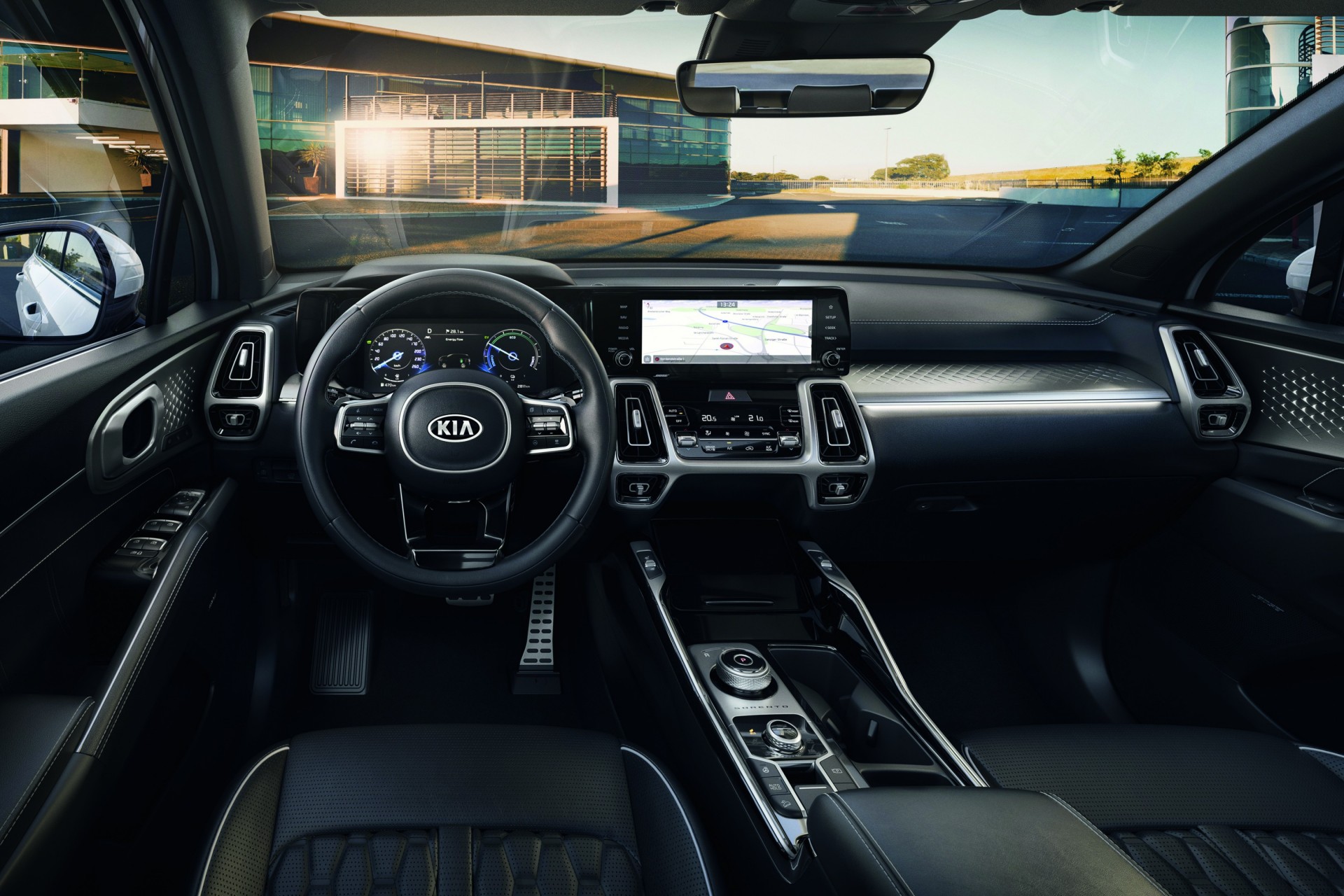 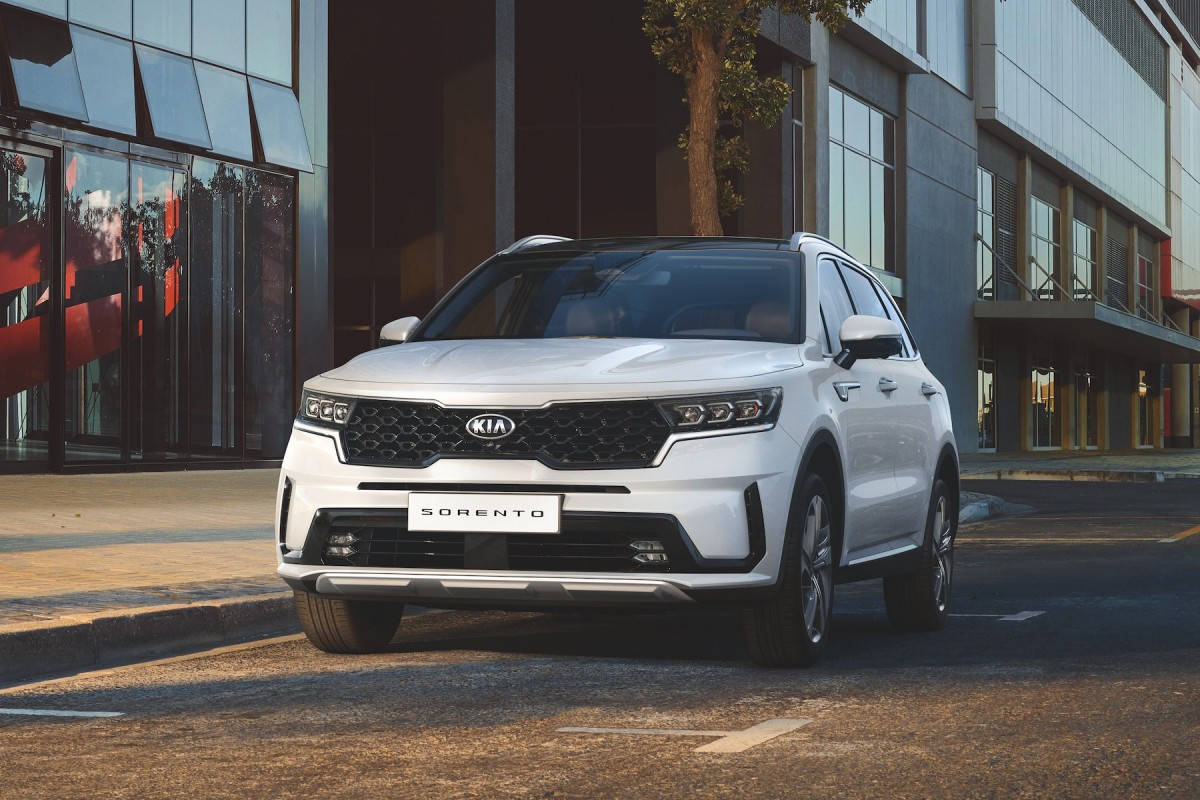