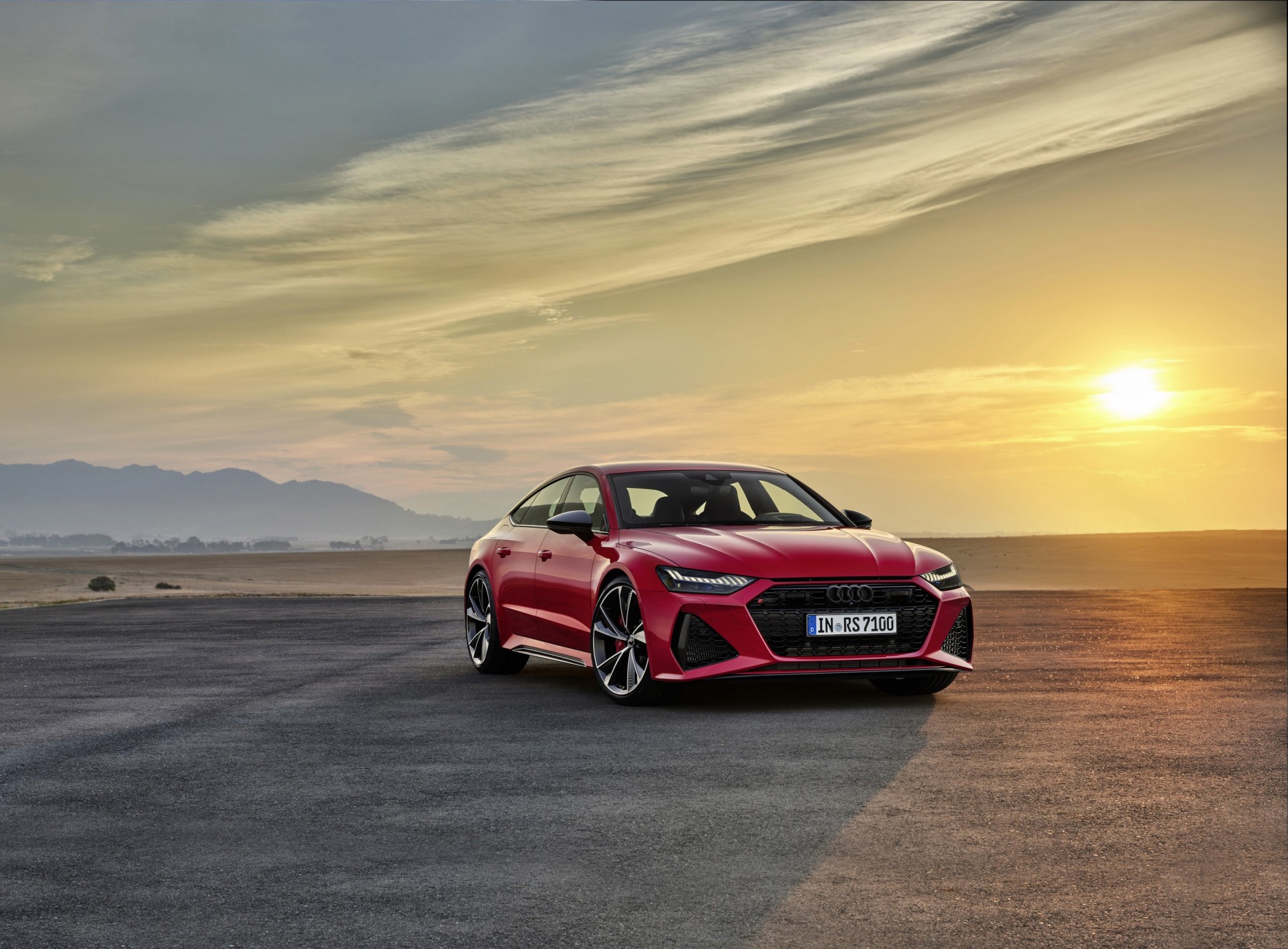 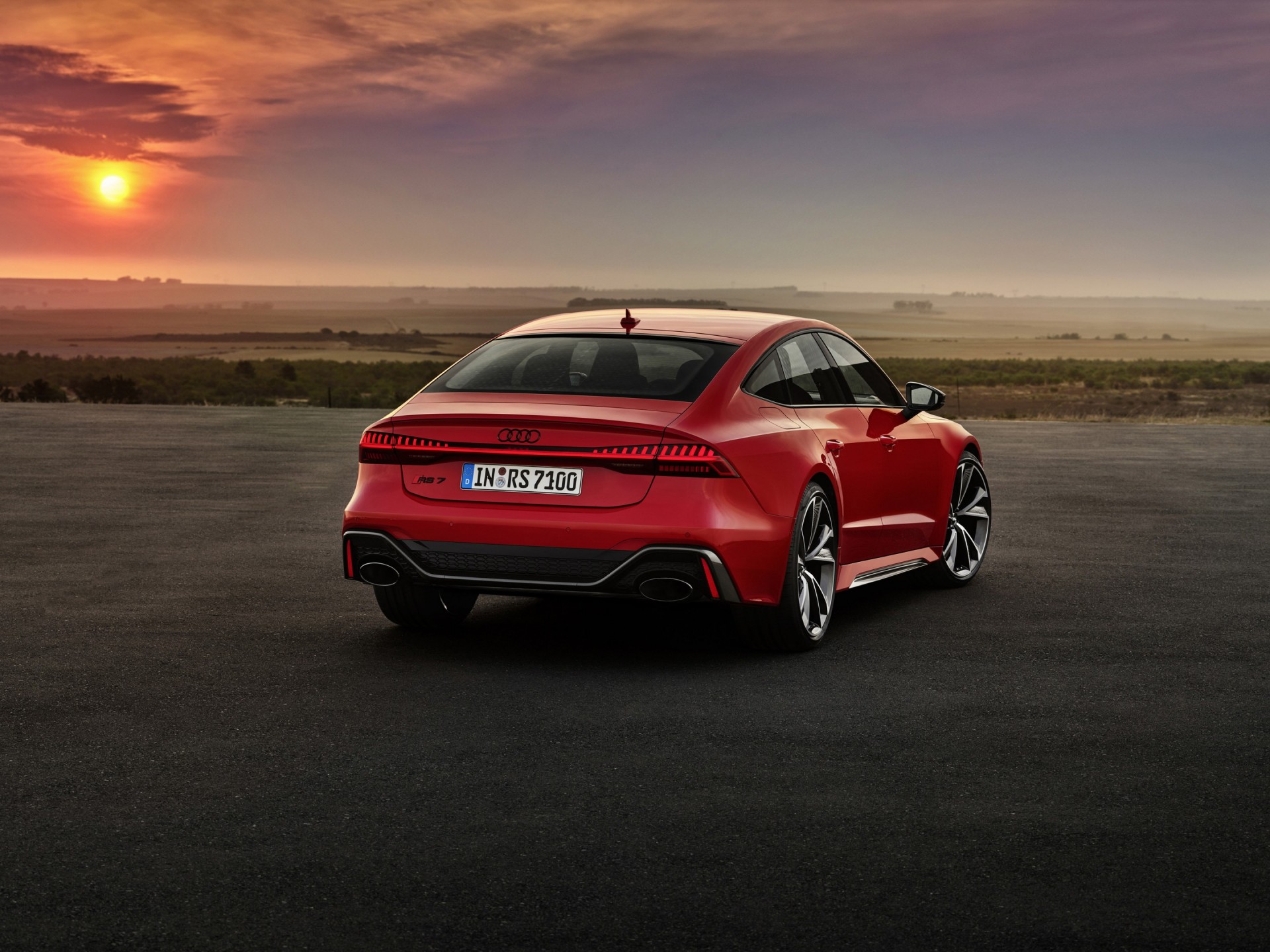 Lordy, Lordy – temptation beyond endurance has just been feasted upon anyone with a hint of octane in their bloodstream, with the launch of Audis new RS7 Sportback at the Frankfurt Motor Show.

Visually this latest RS7 Sportback sits low to the tarmac, with its arches flared and coupe styling hinting at the potency that lies within. It shares the coupé-like lines of the base model’s body, but only in four areas: the hood, the roof, the front doors and the tailgate. The RS-specific exterior design gives the 5,009-millimetre grand tourer its own persona and character.

The front of the new RS 7 Sportback features a broad, flat Singleframe with no contrasting border. The radiator protective grille with its RS-specific three-dimensional honeycomb structure has retained its gloss black appearance. Large front air inlets and vertical fins in gloss black add to the aggressive styling. A horizontal blade marks a distinctive downward edge to the front end.

The rear end’s curved trailing edge and strip of lights linking the main rear lights make it one of the characteristics defining features of the RS 7 Sportback. At a speed of 100 km/h, a spoiler will extend from the tailgate. The RS exhaust system, with a large, chrome-coloured oval tailpipe on each side, sits beneath an RS-specific bumper with a rear diffuser and design elements in gloss black. The new RS 7 Sportback comes with LED headlights fitted as standard.

The 4.0 TFSI in the new Audi RS 7 Sportback produces 600hpand delivers 800Nm of torque, thanks to its mild hybrid system (MHEV) with a 48-volt main on-board electrical system, the belt alternator starter can recover up to 12 kW power under gentle acceleration and feed it into a lithium-ion battery as electricity. If the driver releases the accelerator at a speed between 55 and 160 km/h, the drive management will select one of two options. Depending on the driving situation and the settings in Audi drive select, the new RS 7 Sportback will either recover energy or coast with the engine switched off.

When the driver steps on the accelerator, the belt alternator starter will start the engine again. MHEV technology allows for start-stop mode at speeds below 22 km/h. As soon as the vehicle in front of the new RS 7 Sportback starts moving, the engine will spring back to life—even if the brakes are applied. With the MHEV-technology it is possible to reduce fuel consumption by as much as 0.8 litres per 100 kilometres.

The power produced by the 4.0 TFSI flows via the standard eight-speed tiptronic transmission with optimised shift times and a new launch control function to the quattro permanent all-wheel drive system. Drive forces are distributed to the front and rear axles in a 40:60 ratio via the purely mechanical centre differential. If one-wheel slips, more drive torque automatically goes to the axle with the better traction. Up to 70 percent can flow to the front wheels and up to 85 percent to the back wheels.

The standard RS adaptive air suspension with controlled damping has been tuned specifically to suit the RS. The sport air suspension can be set to three modes and includes automatic level control. In the normal position, the body of the new RS 7 Sportback sits 20 millimetres lower than an Audi A7 Sportback with standard suspension. At speeds above 120 km/h, it will drop by a further 10 millimetres and offer a lift mode enabling the vehicle to be raised by 20 millimetres if requested.

A driver can determine the character of an RS 7 Sportback using the Audi drive select dynamic handling system. There are six profiles available: comfort, auto, dynamic, efficiency and the customisable RS-specific RS1 and RS2 modes, which can be enabled directly via an RS MODE button on the steering wheel.

A stripped-down look with sporty accents is the key stylistic elements in the interior of the new Audi RS 7 Sportback. Much like the exterior design, the design language combines taut, sinewy surfaces with clearly defined contours. There is plenty of space for the driver and passenger, with the architecture of the interior accomplishing a seamless transition to the futuristic user interface. The upper MMI touch response display is embedded in the black-panelled architecture in a way that renders it almost impossible to see where the display ends and the surroundings begin.

The range of colours for the new Audi RS 7 Sportback encompasses thirteen standard exterior paint finishes, including the two RS-specific shades of Nardo gray and Sebring black, crystal effect, as well as five available matt effect paint finishes. The exterior mirror housings are gloss black as standard, with aluminum matt or the colour of the car available as options. 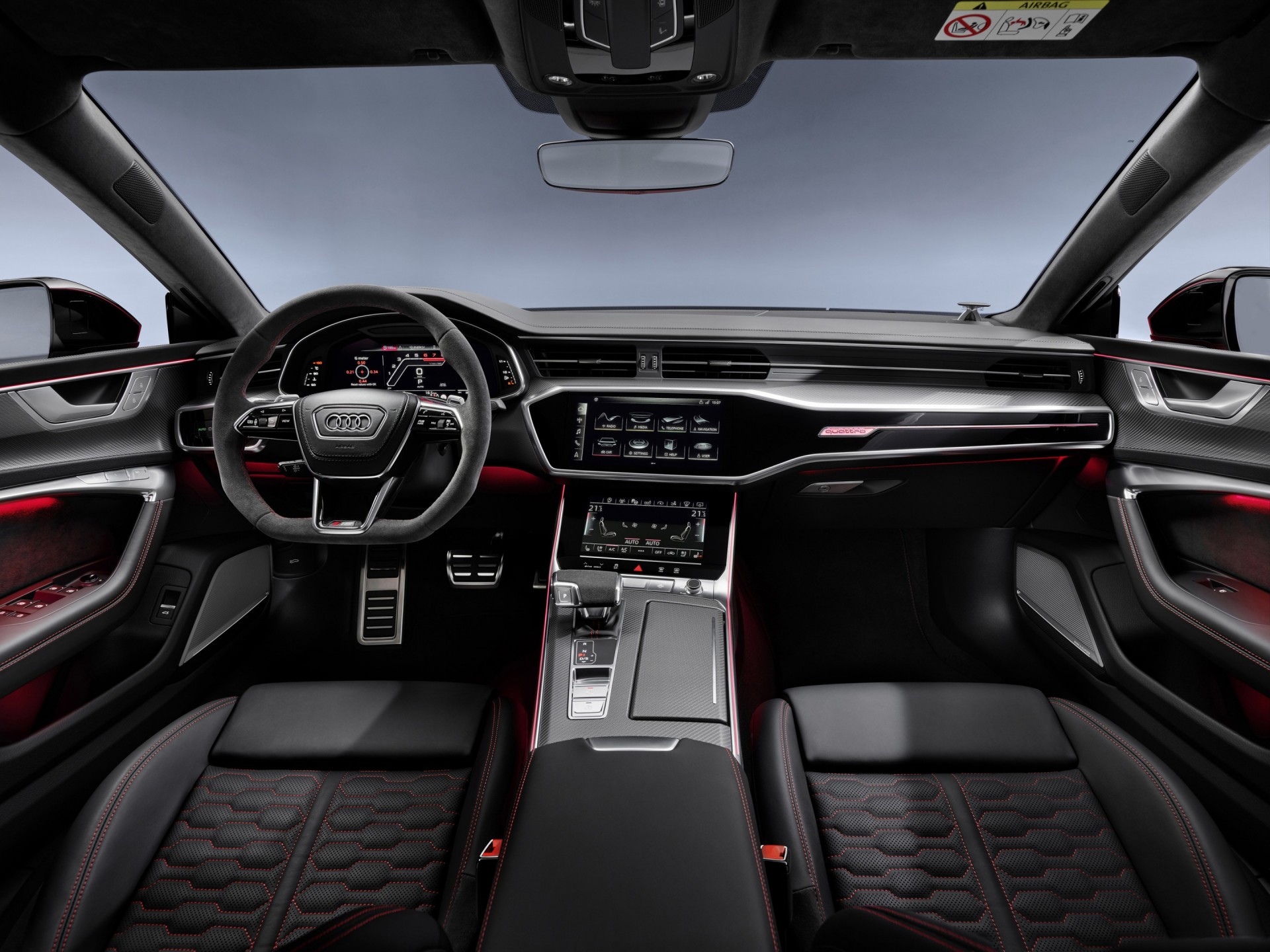