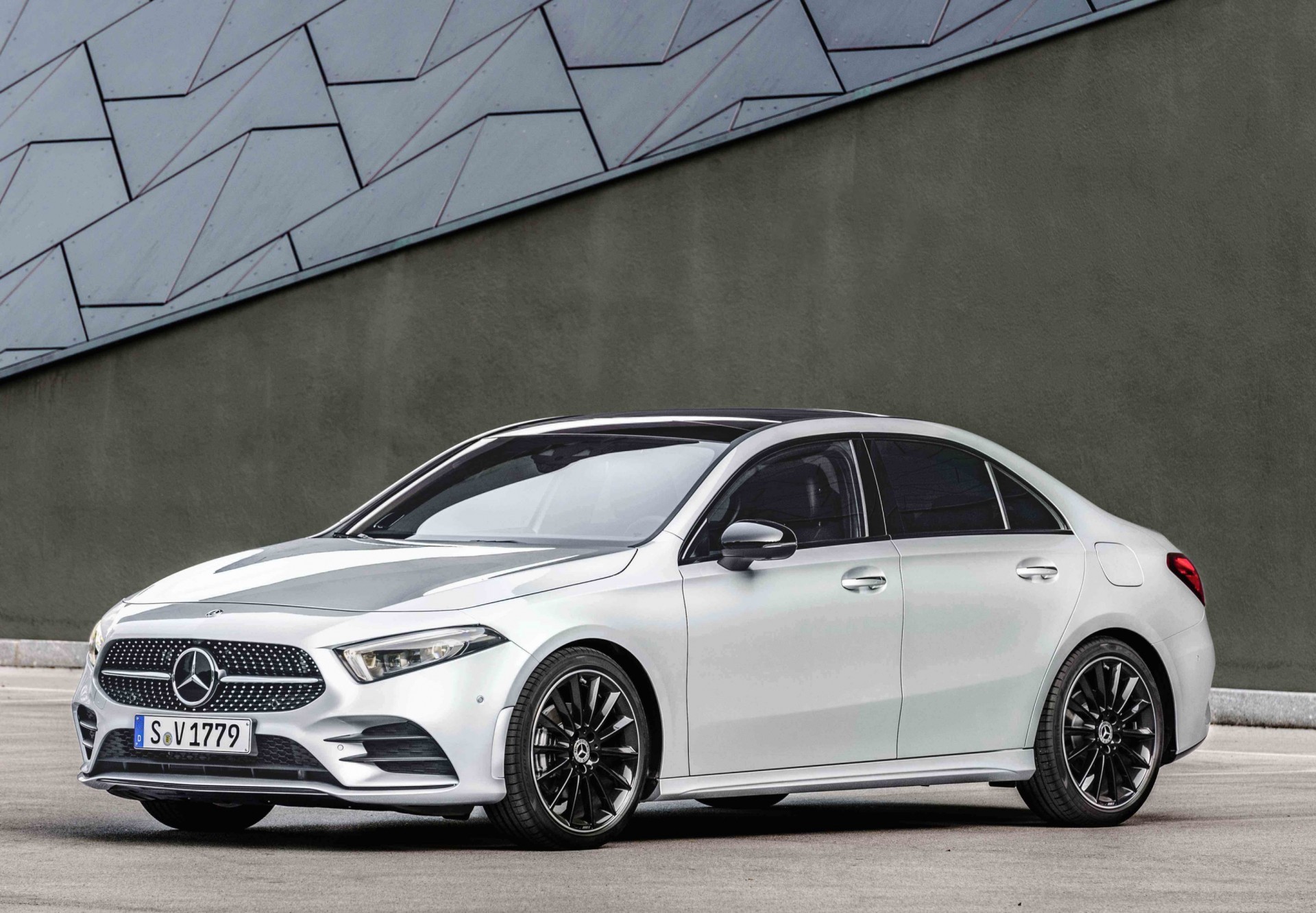 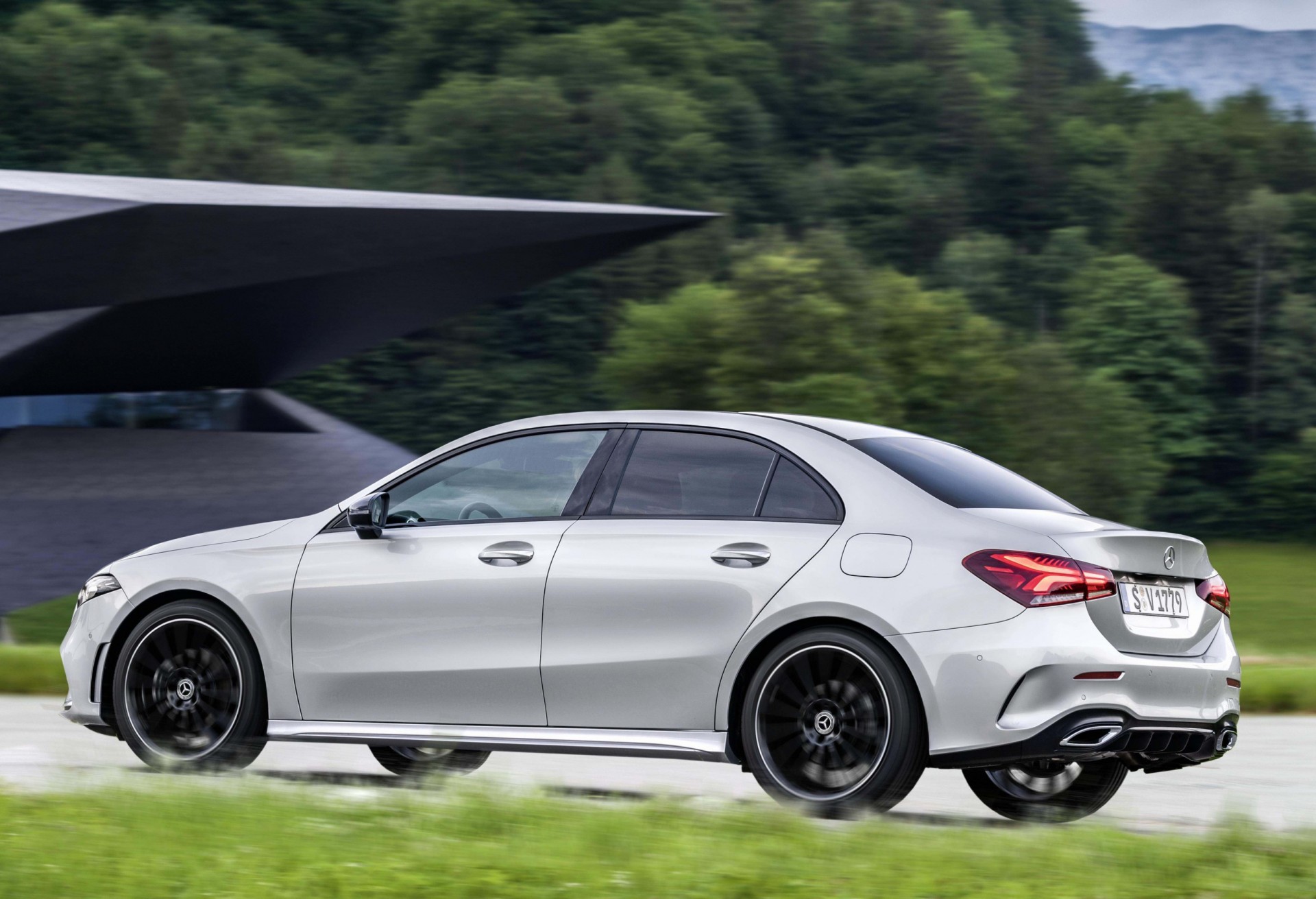 The Mercedes-Benz new A-Class Saloon and its high-performance AMG A35 variant is now on Irish soil. At a time when the nations car-parks are dripping with all manner of Crossover, mid-sizes SUV’s and their larger family members, the sight of this three-box addition to the A-Class range is a joy to the eyes.

First A-Class Saloon models to arrive here are the A200 petrol at €33,390 and the A180d Automatic at €34,220. Following them will be an entry model A160 petrol and A160d whose prices – to be announced on arrival – will be ‘pitched competitively’ around the €30,000 mark, according to Ciaran Allen, sales manager for Mercedes-Benz passenger cars in Ireland.

We saw this very smart, front-wheel drive saloon at the recent Geneva Motor Show, where it did not look out of place, as it stood next to the C, E and S-Class establishment. Such has been the youthful design injection across the Mercedes-Benz catalogue that those who know within, reckon a new, younger by some thirteen years, procession, is now entering their showrooms with their eyes on the A-Class menu.

Folk who would never consider a fuddy-duddy car with the star, are most certainly attracted to this new Stuttgart swagger. It will vie for your Euros against the Audi A3 Saloon and the BMW 2-Series Coupe.

Unmistakably a Mercedes, many will double-take the new A-Class Saloon at first sight, its face, body-line and rear end providing the visual DNA of its forefathers. Some 130mm longer than the hatchback, Mercedes-Benz have the obvious intent to build on that success, with much of what we use to identify a Merc clearly inherent on this executive four-door.

I like its sloping bonnet, of course its star centre in its grill, its slanted headlights, high shoulder line and sloping roofline down to the boot, with its 420 litres of cargo space, some fifty litres more than the hatchback.

It is inside where all the new Mercedes’s will magnetise, the A-class Saloon getting a new dashboard screen and control-and-display system, that the designers cleverly make it appear to ‘float’ in a visually three-dimensional way.

MBUX - another assembly of capital letters for us to decipher and understand. In this instance think off this fab-four, the Mercedes-Benz User Xperience, as your invisible butler. Via the touch screen, touch pad and touch button technology, MBUX brings intelligent voice control, natural speech recognition and augmented reality features that assist the driver in numerous ways. Cleverly, this system also gets to know you, learning your habits and thereafter operating intuitively.

Included on the safety and driver-support menu are a see-ahead camera and radar with a range of up to 500m, lane-keeping, adaptive braking, and various distance control and driver assist systems.

Two four-cylinder petrol options, 1.4-litre and 2.0-litre and a new 1.5-litre diesel with 116 to 224hp range, provide your propulsion choices. Drive to the front wheels is through a 6-speed manual and 7-speed automatic transmission, depending on your model choice.

Priced from €59,900, this all-wheel drive, 2.0-litre four-cylinder turbo runs through a 7G, dual-clutch transmission, all with the intent of utilising the 302bhp on offer. Temptation is a given, confession inevitable.