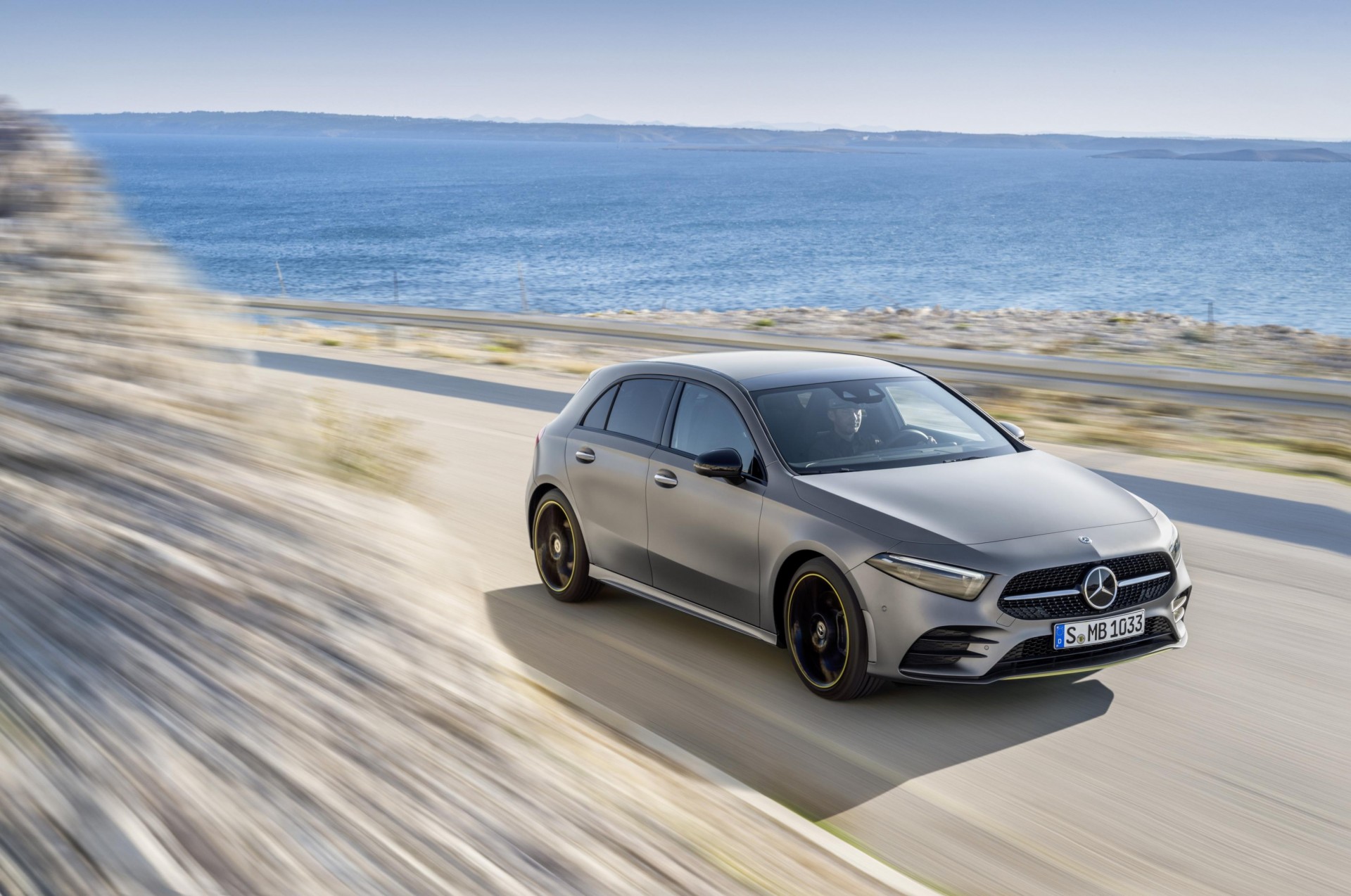 The first Mercedes Benz A-Class was a square’ish affair, with plenty of tech, space and importantly, that star badge on a city car, a first for the brand. Dynamically it was functional as distinct from fiery, but it ticked the boxes overall. Now in its fourth generation, the 2018 A-Class is a world away from that first offering and possesses much to attract the younger buyer

This 2018 A-Class states its claim from first view, particularly in AMG Line trim, consolidating it with a very pleasing interior and delivering a drive that is none too shabby. This is quite the package from Mercedes, a technical tour-de-force, with big improvements on the previous and exuding a persona that will attract a new waft of customers who heretofore would look elsewhere for a premium small hatchback.

Buyers seeking an upmarket hatchback and indeed those looking to upgrade/downsize their driving accommodation, now have a very serious player in the new 2018 A-Class. The choice has never been more delightful.

That big star sitting central on the grill of my AMG Line trimmed test car is hard to ignore. Standing with its wide track and sleek lines, this new A-Class has all the street presence to attract. Gone is any fuddy-duddiness of heretofore, this new five-door hatchback is not just forward thinking, it is forward looking.

I like its high shoulder line, the side skirts, the front end well proportioned, while at the back the sloping roof line, subtle roof spoiler, rear lights, twin chrome exhausts and its stance on luverly five-spoke alloys shod in 225/18” tyres, give the impression of it clawing to the tarmac – Yep, I liked it from just standing still.

The chrome vents, the centre and driver’s consoles, all one in my test car via two 10.25” screens gelled into one, and the leather-clad steering wheel easily at home in an S-Class, all register visually the instant you sit into the supportive seats. It may be the smallest of the Mercedes Benz car family, but it loses nothing in its scale.

Smartphone users will delight in the A-Class, where a myriad of functions can be operated from the palm of your hand. These include opening and starting your new A-Class via an App on your smartphone. Having already sampled the Mercedes Benz User Xperience, (MBUX), in their new Sprinter van, I can vouch for its ease of use. Here some serious witchcraft brings voice recognition to a whole new level and your best motoring mate is someone who responds to “Hey Mercedes.”  Taking some time to appreciate the talents of the central touchscreen, lower centre control panel, steering wheel touchpads and MBUX system is well worth it, and the rewards are smile-inducing and importantly safe.

Users of iPhone’s Siri or the domestic Alexa, will make the transition seamlessly, as will the many, with the car’s easy response to a command following the above greeting on temperature, entertainment and Sat Nav. The term ‘artificial intelligence’ is now a part of motoring and here in the new A-Class, they system covertly gathers aspects of your driving behaviour, remembers it and adapts the car to your habitual requirements.

Running on a 1.5 turbo-diesel, feeding its 116bhp through a seven-speed automatic, this new A-Class won’t set the tarmac ablaze. It is however perfectly good company as long as you remember this and don’t ask it a question that is better answered by the 1.3 litre 163bhp turbo-petrol version.

The umbrella of safety that invisibly monitors your journey in the A-Class is very impressive. Such is the range and presence  that it is easy to see that in the coming years we will have a vast array of automated systems, which will override or simply guide us through roads and traffic.

Many cars today come with Lane Departure Warning, giving the steering a resistance if the car seeks to cross the centre or hard shoulder lines. With my test car this was as aggressive a resistance as I’ve ever experienced, the car’s system obviously determined to say within unless an indicator is activated.

Urban and open road driving posed little issue for the A-Class, with the 120kph motorway limit well within its repertoire. Out in the twisties and it can entertain without being overly informative or sportingly engaging. The raison d'être for my test car did not include those factors concentrating on overall comfort and ease, which it achieves quite successfully.

All in all, I enjoyed my time in the new A-Class. It has the looks outside to attract and once inside it introduces you to the future, now. This is not just a competitor in this very active segment, it is now the one you have to pass before buying elsewhere.