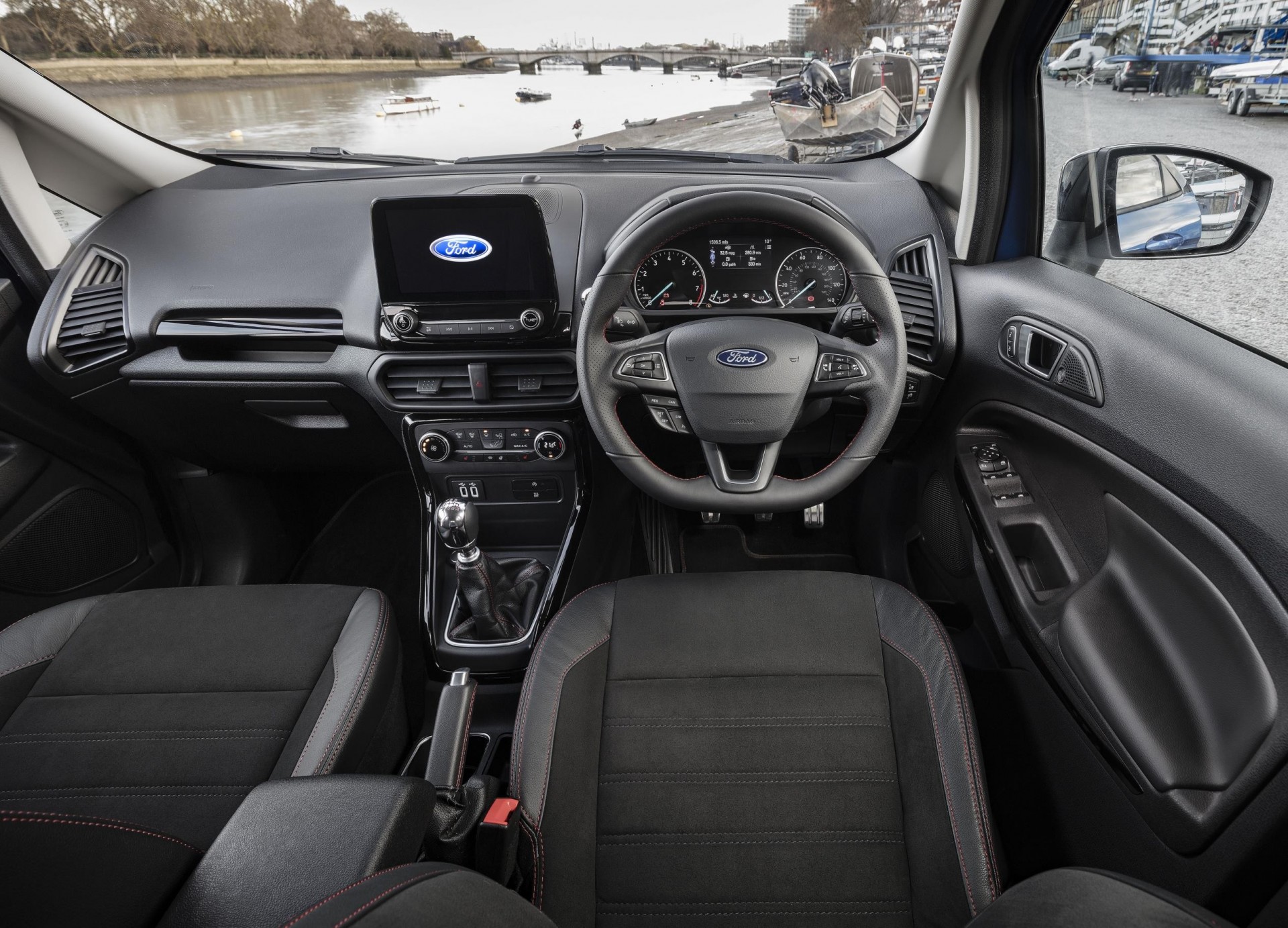 If ever Ford made a ‘marmite’ car, this is it, the EcoSport, a car built on the very talented Fiesta platform, and raised to partake in the ferocity of the small Crossover/SUV segment. The EcoSport was originally sold in the South American and Asia markets, before being revamped and offered in Europe with its awkward rear door opening, complete with spare wheel mounted to it.

It just didn’t push the buttons of a lot of buyers, Ford’s ability to provide a car for the masses stalled on this occasion. The latest EcoSport has lost the spare wheel hanging on the rear door, has the latest Ford interior and is powered by their 1.0 litre, three-cylinder, turbo-petrol engine or the 1.5 turbo-diesel. On the inside, all is Ford-friendly, with clear instrumentation and a fit ‘n finish that is up to anything in its class.

It still retains the rear swing-door, opening from right to left, often a tad awkward or just plain annoying, it remains as the legacy evidence of a car built for others. Aside from that, the 2020 EcoSport is doing its best to fit in, to be liked and in the case of my test car, standing on nice 5-spoke alloys, dressed in lovely Lighting Blue with a black roof, it looks smart and inviting.

I enjoyed my time with the EcoSport, its neat dimensions very user-friendly around the city. Keyless entry, comfort and connectivity without complaint, with a drive that while not up to Fiesta standard, I reckon few owners will ever venture to where they reach its limitations.

The arrival of the new Ford Puma will probably push the EcoSport to the rear of the showrooms, the Ford machine bestowing their unquestionable knowledge and talent on the newbie.

Now produced in Romania, this latest EcoSport is a much-improved prospect in this vicious segment, where the slightest failing is punished in the showroom. With the arrival of the new Ford Puma and the presence of the Fiesta Active, the door may be closed on the EcoSport’s future.

Additional options on this model:

Some of the Competition:

I like its look of the EcoSport, its street stance and overall finish not difficult to like. My ST-Line trimmed test car was very easy on the eye, the colour scheme, the wheels and its overall appearance one of confidence and projected competence. No doubt, the two-tone colour scheme gives it, and others within the segment, that extra bit of pizazz, the chunky look of the EcoSport promising more than its donor Fiesta.

It’s a Ford. Carrying all that we have come to experience within the latest Fiesta, the EcoSport interior is equally welcoming and user-friendly. Built as it is on the Fiesta platform, the internal room is similar, offering reasonable room for the average and squeezing those above.

Sitting into the decent seats, hands fall to a flat-bottomed leather steering wheel, with comfort, safety and entertainment well looked after, Bluetooth, an eight-inch touchscreen with Ford’s Sync3 and the now normal Apple CarPlay and Android accessed by merely plugging in.

The latest model EcoSport is much more together than the introductory model of 2013, in keeping with the talents of the Fiesta from which it is spawned. Being a high-rise, the EcoSport will roll on corners if your enthusiasm goes beyond common sense, but keep it smooth and this Crossover/SUV will delight the majority of owners in its ease of use, good driving position and competent engines.

The popularity of Crossovers shows no sign of abating and there is little doubt that the repetitive task of getting into and out of the EcoSport is so easy in comparison to a lower slung hatchback or saloon car.

Out through the city and across our motorway network, I found no problems with the EcoSport, the one-litre petrol engine belying its three-pot size and delivering an enjoyable, composed drive.

In this segment the EcoSport is swimming with piranhas, where the slightest nick can result in you being on the menu. Aside from the awkward rear door, the 2020 Ford EcoSport is better able to compete than heretofore.

ST-Line features (in addition to Titanium): 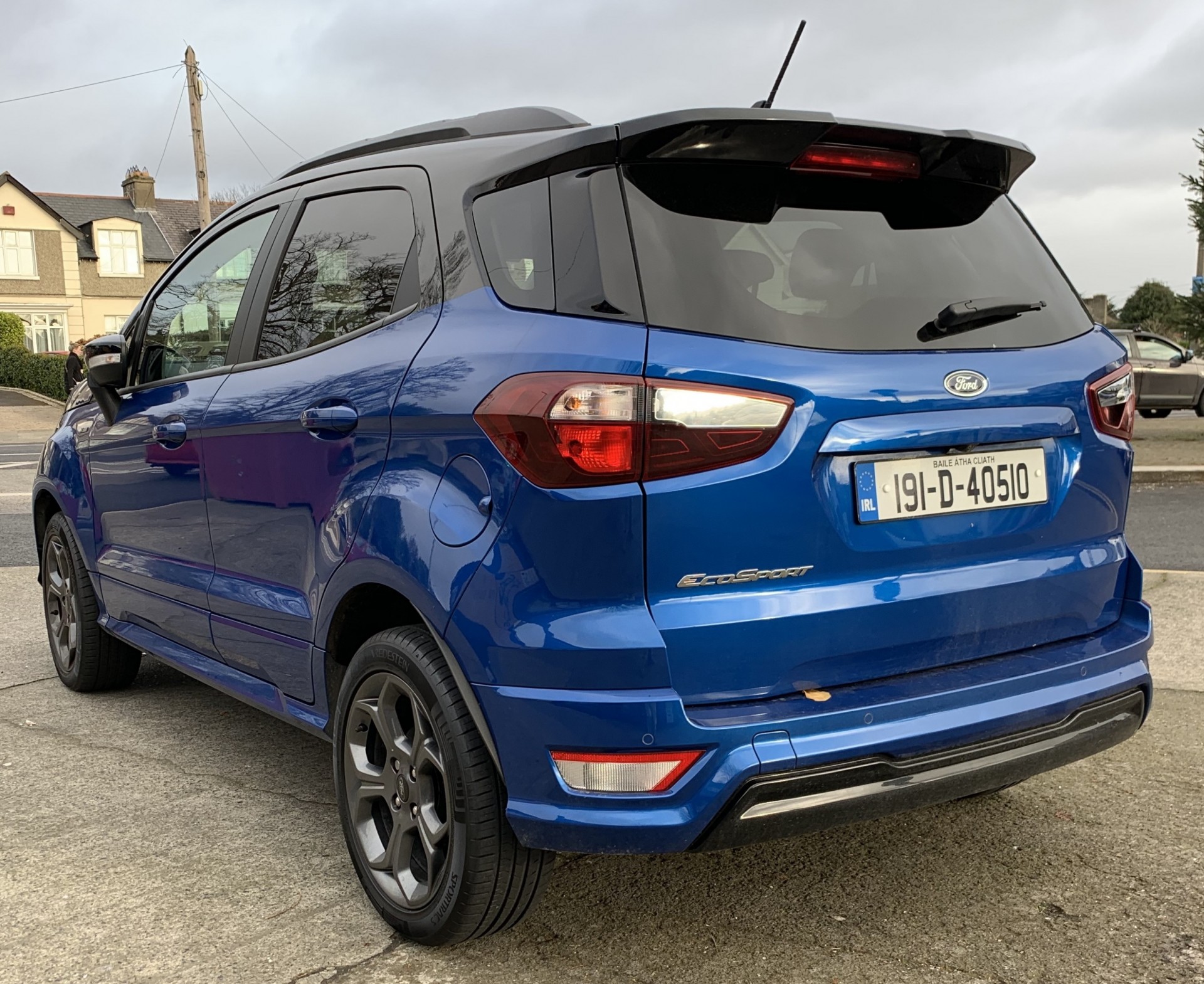