DPD Ireland to decarbonise their Irish fleet by 2030 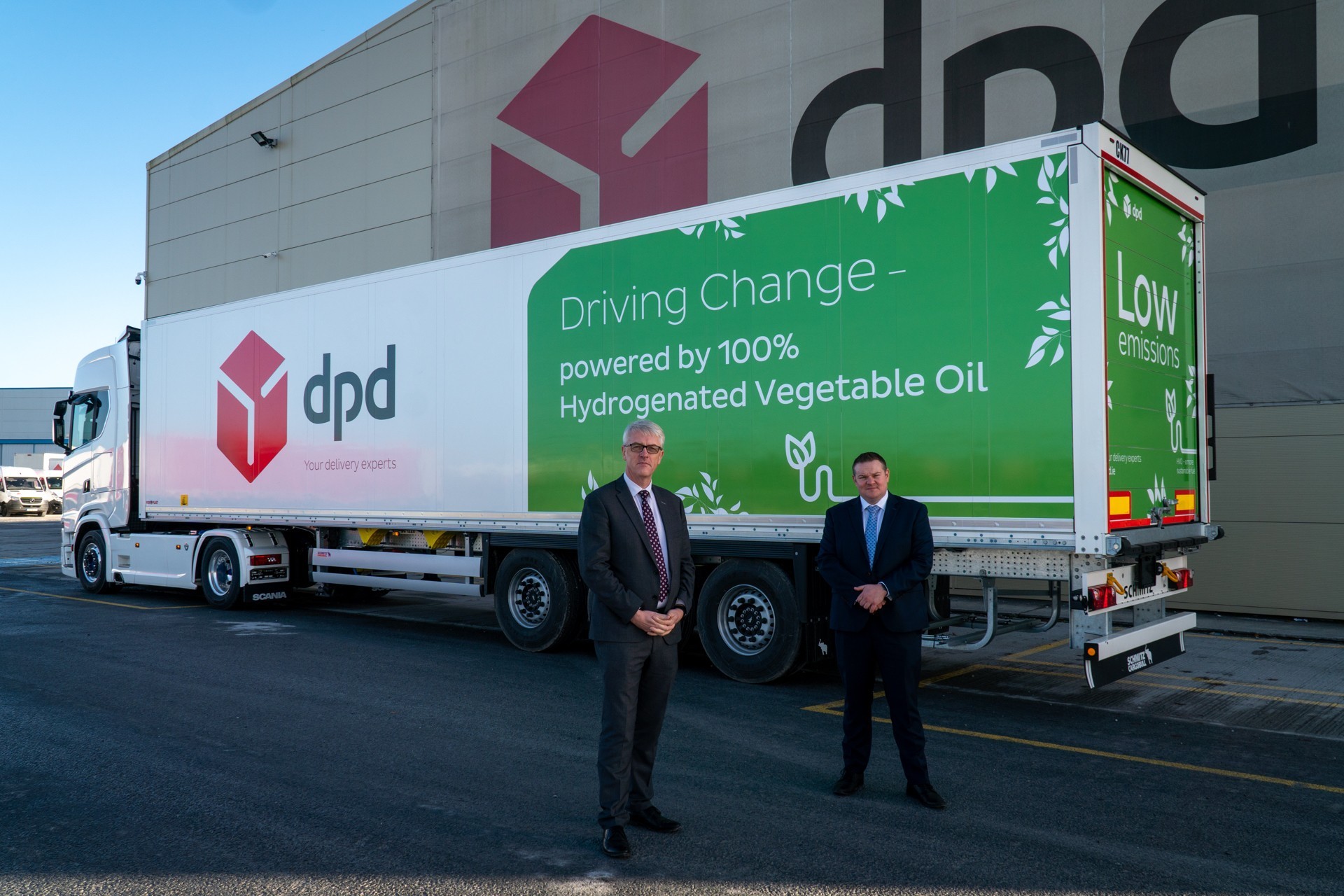 Replacing Diesel
DPD Ireland has deployed Hydrotreated Vegetable Oil (HVO) as a replacement fuel for
diesel in its heavy goods vehicles (linehaul) as part of an ambitious drive to decarbonise
its Irish fleet by 2030.
The parcel-delivery firm is leading the charge towards sustainable deliveries, having
achieved the milestone of 1 million sustainable deliveries in August of this year. The
company is in the process of switching all its domestic linehaul routes to 100% HVO in a
bid to slash its linehaul emissions by 87% (vs 2020). These line-haul routes carry
parcels between DPD Ireland’s central sorting hub in Athlone and its 35 depots on the
island of Ireland. This follows a successful trial of the biofuel which ran from June to
September 2022.
Equivalent of taking 937 cars off the road for a year
Powering all domestic linehaul routes with this sustainable biofuel, DPD expects to
reduce its emissions by over 4,350 tons CO2e per year versus a conventional diesel
operation. This is the equivalent of taking 937 cars off the road for a year*.
Installation at central sorting hub in Athlone
HVO is not available yet at commercial pumps, which is why DPD Ireland is installing
dedicated HVO storage tanks on site at its central sorting hub in Athlone. Once
complete, the company will be able to supply 100% of its domestic linehaul routes on
renewable HVO.
Speaking about their decision, DPD Ireland Chief Executive Des Travers said the
company began looking at alternative fuel options for its line-haul fleet after difficulty
sourcing electric heavy goods vehicles.
Des commented, “We’ve had HVO on our radar for several years. It has become
imperative for our business to reduce our emissions which is why we are taking action.
We are on a journey to become the most sustainable parcel delivery company in Ireland
and this is just the next step for us. We will continue to overcome the challenges as we
100% decarbonise our business”.

He continued, “At full capacity, the company will be avoiding 16 tons of CO2 equivalent
per day versus a fully diesel operation. This is due to the reduced well-to-wheel
emissions that HVO offers.”
20% of its total fleet, expected to be electric by mid-2023
The company is currently delivering more than 4,000 parcels per day by electric van,
and expects delivery of 205 new all-electric Ford eTransits, more than double the target

amount announced last year. This will bring the electric fleet to 258, nearly 20% of its
total fleet, by mid-2023.

HVO is seamless in that it can be used as a drop-in replacement for diesel
Mr. Travers said the switch to lower carbon fuels is one of the actions DPD Ireland is
taking to decarbonise its Irish fleet by 2030.
Unlike electric vans where you need to purchase a new van, HVO is seamless in that it
can be used as a drop-in replacement for diesel in the transition to low-carbon fuel
alternatives. The vehicle or engine does not need to be replaced, which is very inviting
for companies looking to change their fleet to more sustainable means.
James Atkinson, Sustainability Programme Manager emphasised the importance of
tracking.
He said, “In order to validate our emissions savings, we are using a smart pump system.
The HVO dispensed at the pump is automatically recorded to track our total usage. The
vehicles’ odometer is tracked when the fuel is dispensed, and a digital record is kept that
correlates fuel used with kilometres driven. By tracking the vehicle type, we can more
accurately calculate the emissions avoided. This is a step up in our emissions tracking
and enables better reporting."
Further €2 million investment
DPD Ireland last year announced a further €2 million investment to decarbonise its
Irish fleet with the addition of 100 new electric vehicles by the end of 2022.
The company has already invested €3.2 million since 2019 in electric vans and
infrastructure.
DPD Ireland is part of the DPD Group, the second largest international parcel delivery
network in Europe. The group delivers 7.5 million parcels each day – 1.9 billion parcels
per year.
Pictured at DPD Ireland headquarters in Athlone are Colin Kennedy, Chief Information
Officer and Darragh Lowry, Head of Transport for DPD Ireland.
About HVO
HVO is a 100% renewable and fossil-free fuel that is made by processing waste vegetable
oils and animal fats. The use of HVO fuel offers up to 90% less well-to-wheel emissions
than diesel. This is calculated based on the HVO supplier’s proof of sustainability which
lists the feedstocks used and their relative emissions. These feedstock fuels are treated
with hydrogen to produce HVO which is chemically similar to diesel, with less emissions
in its production. It also reduces emissions of local air pollutants such as nitrogen oxides
(NOx), particulate matter (PM), and carbon monoxide (CO). Although burning HVO in a
combustion engine still produces tailpipe emissions, the overall emissions of HVO

(including emissions related to extracting and producing the fuel) are up to 90% less
than diesel.
About DPDgroup
DPD group is the largest parcel delivery network in Europe. The company combines
innovative technology and local knowledge to provide a flexible and user-friendly
service for both shippers and shoppers. With their Predict service, they keep their
customers in close contact with their delivery.
With 97,000 delivery experts and a network of more than 58,000 Pickup points, DPD
deliver 7.5 million parcels each day – 1.9 billion parcels per year – through the brands
DPD, Chronopost, SEUR and BRT.
DPDgroup is the parcel delivery network of GeoPost, which posted sales of €11 billion in
2020. GeoPost is a holding company owned by Le Groupe La Poste.
DPD group aims to deploy 7,700 new low-emission vehicles in 350 of the largest
European cities by 2025, as urban transportation of goods is responsible for up to 30%
of CO2 emissions in European cities.